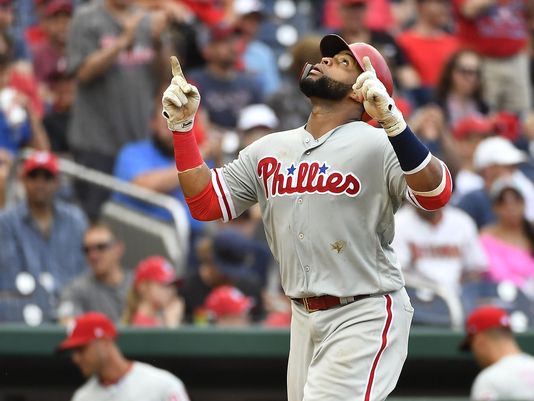 With all of the Philadelphia Phillies offseason activity. Making sure you have solid chemistry is a huge step to success. Not only do you have to have talent on paper. But you have to have chemistry in the clubhouse. And that was not present in the Phillies Clubhouse late last season. And this story shows it all. According to Jeff Passan, during the Phillies final regular season series against The Atlanta Braves, multiple players on the team were playing “Fortnite” during the game. And that really irked Carlos Santana. So much so that he smashed the TV in with a bat.

Carlos Santana was so livid that his Phillies teammates played Fortnite during games in 2018 that he grabbed a bat and smashed a TV. With an overhauled team that includes Bryce Harper, what have the Phillies done to address their clubhouse? Story at ESPN: https://t.co/vXFgetp5Of pic.twitter.com/tou1coHToL

Santana was not the only player who was upset. Veteran pitcher Jake Arrieta also said if he knew what was going on he would probably smash a tv too. Given the dysfucntion, The Phillies have made it a priority this offseason to improve the clubhouse chemistry. their manager Gabe Kapler formed a committee of 13 players to help develop policies to keep players in the clubhouse accountable. Santana was moved this offseason.

Carlos Santana is once again a member of the #Indians.

Yandy Diaz is now with the #Rays.