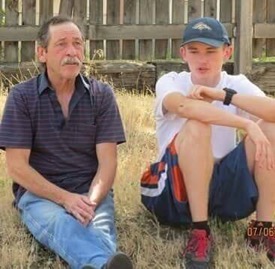 March 15th, 1955 in a small town in Maine, Eddie Chavaree was born. Today would have been his 64th birthday and I write this article in loving memory of my grandpa, and wish him a happy birthday. Losing someone is never easy. You’re never quite sure of when, or how it’s going to happen and you’re never ready for it. I certainly wasn’t ready to lose my grandpa, or as I referred to him “Bampa.” Sports have always been a passion of mine so long as I can remember, and he was a huge part of that. I’d like to share a collection of short stories regarding sports or activities that I did with my Bampa, and then conclude with who he was and how much I admire him.

Ice Fishing is the only kind of fishing I like to do and that’s thanks to my Bampa. We went all the time when I was a kid and there was a long drought where I never caught a fish. The only major thing for years was one time I was running on the ice and I fell into one of the holes we drilled earlier, and I remember it being so cold that it burned. That was until New Years Eve one year, where I caught 2 fish both over a foot long. I remember running over to my Bampa with the fish still on the line not knowing what to do next. He laughed and told me “Good job, easy there” in his Maine accent that would present itself from time to time.

A quicker story involves when it was my birthday. I opened the present my Bampa got me and I must have been like 5 or 6, and inside was a bow and some arrows. The pull back weight on this thing was like 12 pounds so you couldn’t really do anything crazy with it, but my mind didn’t get that, and I looked at him and said “Bampa, my first weapon” in an excited voice and he laughed his butt off.

My Bampa also taught me how to throw horseshoes. He had a horseshoe pit in the back yard and one day we just went out and he showed me technique. One of my first throws hit the pole and he was so excited and explained to me it was a ringer. Out in Maine horseshoes are a big deal so when I went out there and threw with the best of them it made me feel at home.

The first team sport I ever played was little league baseball. I didn’t know at the time, but apparently my Bampa was the one who payed for me to play baseball at a time where my parents couldn’t afford for me to play. During this one season I played every position that wasn’t catcher for the South Suburban Sharks (who wore Marlins hats). I’d also come to find out that the most fun my Bampa had in team sports was also in little league baseball. He walked 5 miles to practice, and 5 miles back home. He said shortstop was his favorite position, but his most memorable play came at second base, “It was the last game, and we hadn’t won a game all year and I caught a line drive at 2nd so we could win our only game, and also my last game of baseball.” I remember him being at all of my baseball games and always asking me my stats at bat, or if I was pitching or however many outs I was responsible for.

All of these other sports and activities will always hold a special place in my heart, especially with Bampa’s presence and storytelling. However, one sport bonded us the most and that sport was football. I started playing football in the 6th grade and played all the way through my senior year of high school. Bampa can be seen every year at all of my games. He came to them when we went 1-7 my first year, and then when my team went 7-1 the next two years of middle school. Before smart phones, Bampa would drive me to a lot of games from sheer memory and a natural sense of direction. On the way to and from the games all we would talk about is football. The rookies in the NFL that year, how his Patriots were looking, how my Broncos were looking, who was going to win the Superbowl and so on. Starting in 6th grade, my Bampa, my uncle and I started a “Pick’em” league where we would choose the winners of each week’s games and I’d visit his house every Saturday to get his picks. During the games he was more active than anybody. He’d be running up and down the sidelines with me as if we were making plays together. Anytime I went over he wouldn’t hesitate to go outside and toss the football. A very special moment took place in my 7th Grade season where him and I both walked out with awards. Myself earning the honor of what was basically MVP, and my Bampa winning Sideline MVP. It was really special to share accomplishments for the same reasons. He would continue to show up rain or shine, hot or cold to my football games because he knew it made me happy, and it made him proud.

Sports and my Bampa go hand-in-hand, but sports weren’t what defined him as a human being. My Bampa was defined by where he was from. The beautiful state of Maine where him and I got to spend a week together with his family from back there. Where he got to show me, what interested him. He showed me this sandwich shack he always loved and would eat when he came back. There was this beautiful pond that we got to swim in (don’t ask me if we were allowed to swim in it). This is the first time I had seen the ocean and remembered it. I wadded through the ocean and we went to a harbor full of these massive boats. The pride in his eyes of his hometown was a shine unlike anything I’d ever seen before. He had such a respect for nature, and for the greenness of the trees and the grass which I had come to appreciate with him. Elvis snuck into being one of my favorite artists after my Bampa played the Elvis station and knew every word to every song. No one can perform “Devil in Disguise” quite like Eddie Chavaree could. I saw the East-coast attitude through his family and their small-talk. I met his dad who was so kind and a real hoot. I understood my Bampa’s sense of humor even more after this trip. I understood his fascination with military and history with a fort being one of the spots we toured while out there. Just roleplaying what it must’ve been like got him so giddy and excited. It’s truly one of the best trips I’ve ever had.

These memories I hold dear, but it’s part of my Bampa’s person that I’ll never let go of. He was empathetic. It was ok for your eyes to possibly water up during a movie. Bampa did it. Bampa cared. He was one of the most selfless individuals anyone could ever come across. You really missed out on an amazing man if you didn’t cross paths with Eddie Chavaree. He was so funny, I couldn’t even tell you how many times he made me laugh so hard I cried.  I also couldn’t tell you just how much he meant to me. No article, or collection of words, pictures, stories could relate to you how close my Bampa and I were. I could talk about him all day, 7 days a week, 52 weeks a year because not only was he family, but he was one of my best friends and this is the toughest loss I’ve had in my life up to this point. I’m going to miss him more than he’ll ever know. We would talk weekly on the phone while I was up at college and he’d always ask how UNC sports teams were doing and what I was doing in class. He’d ask so many questions about assignments that I thought were stupid, but I’d be more interested in them the more I’d explain them to him. I remember one of the strongest hugs he gave me was when I graduated high school.

More than anything, my Bampa was a worker. I don’t just mean any worker, he was the hardest working person I’ve ever met in my life. He’d been working his entire life. The end of his days sums up the type of man he was perfectly:

Around August, during one of our phone calls, Bampa was talking about his back hurting. I, as anyone would, recommended he go see a chiropractor. A little while later, he called and told me it still hurt. I told him, “Bampa, you don’t need to work. You can sell your house and go retire in Maine. I know you love that place, and man you could be real happy there.” For reasons I can’t possibly explain, he didn’t. He kept on working. He kept living and busting his ass 40+ hours a week. Still choosing in the pick’em league like nothing was wrong. His Patriots won the Super Bowl this year and if it weren’t for my Bampa, I’d despise those sons of guns. But he chose the Pats and wound up getting second place in our league. Not long after that he was taken to the hospital where it was found that he had tumors in his stomach, lungs, liver, and back. The ones in his back broke his back and he had been working on them for months. You tell me any 63-year-old who can work in a loader on a broken back for months… I highly doubt you can because my Bampa was made of something else. He was so damn stubborn, there was no way he’d die if life didn’t throw everything it had at him. I’m not saying my Bampa was perfect, but he was perfect. He was everything I needed and so much more. He was a place to go and play Monopoly early on Sunday Mornings with. He was a mentor in my becoming a chess player. He was an active Bampa throwing horseshoes, baseballs, footballs, and anything else under the sun. He was an emotional man, and a role model with his day-to-day work ethic. There’ll never be another Eddie Chavaree, and I’m going to miss him. But I’m still going to go on with my day-to-day life, working hard, and making him proud. Thank you for everything you ever did, and everything you continue to inspire me to do. Love you Bampa.