https://thesportsontap.com/wp-content/uploads/2018/10/2018669354-780x0.jpg
Fans raise a banner during the H206 basketball game at KeyArena in Seattle. The game, which brought Seattle basketball legends back to the hardwood, was a fundraiser for A PLUS Youth Programs. Photographed on Saturday, July 23, 2011. (Photo by Joshua Trujillo, seattlepi.com)

Seattle, the Emerald City, resides along the coasts of Puget Sound watched over by the snow-capped peaks of the famous Mt. Rainier.  Long considered one of the most beautiful places to live in the United States, the population has continued to steadily climb since hosting the World’s Fair in 1962.  However, within the past ten years the greater Seattle area has seen its population increase exponentially, coinciding with the rise of the tech boom as massive companies with roots here such as Google, Amazon, and Microsoft have become more prominent and expanded.  The city now boasts one of the top twenty economies in the country based on a poll conducted in 2015, coming in ahead of cities such as Phoenix, Minneapolis, Detroit, and Denver.  But what do those four cities have in common that Seattle does not?  They all have at least three major professional sports franchises.  Seattle has only two, not including major league soccer, whose league currently has only 23 teams and generates less than one tenth of the revenue of the NFL.

With renovations for Key Arena already in the works in preparation for what appears to be the inevitable arrival of a professional hockey franchise in the near future, the team’s ownership group held a ticket drive in an attempt to gauge the potential interest of fans.  The result was astounding as the ownership group, consisting of movie producer Jerry Bruckheimer, billionaire investment banker David Bonderman, and Oak View Group CEO Tim Leiweke reported that they received 10,000 deposits in only twelve minutes.  By the end of the same Thursday, they had reached 25,000.  Which begs the question: What would those numbers look like if Seattle was to be the recipient of a new basketball franchise instead of hockey?  What if Seattle brought back the Sonics? 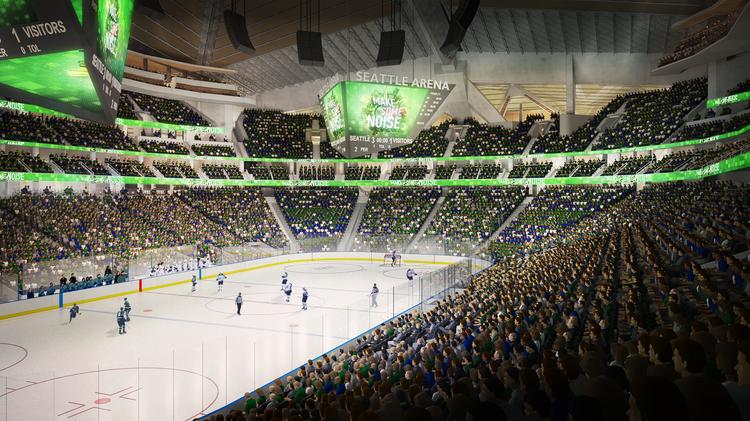 To put things in perspective, this past year Las Vegas received a NHL expansion franchise, the Las Vegas Golden Knights.  On the day of their ticket drive, it took them two hours to reach only 5,000 deposits.  Remember, Seattle doubled that total in twelve minutes.  All for a hockey team that does not even have a name yet.  Now imagine, that instead of hockey Seattle was preparing for the arrival of a basketball franchise, and not one without a name.  No, instead a franchise with 40 years of history in the city, one that was ripped away from us by the cold-hearted conniving Clay Bennett, and one that we have been longing for the return of for ten years.  The Seattle Supersonics.  Does it not give you chills to simply say the name out loud again?  The Sonics.  The number of ticket deposits that would be made on that first day would be absolutely astonishing.

This is no disrespect to hockey fans or to the franchise that seems to be the apparent first to call the newly renovated Key Arena home, but the number of deposits that were reported by the team’s ownership could easily be doubled if it were in fact a Sonics homecoming we were preparing for.  Seattle has not had professional hockey since 1924 when the Metropolitans were still in existence making it difficult to gauge how rabid a fan base would emerge in the Emerald City.

Part-owner Tim Leiweke told CBS Sports that he himself was “shell-shocked, to be honest”.  Based on that response, it would be fair to assume that Seattle would be able to certainly garner an even more encouraging reaction from a community that has been without professional basketball sine Kevin Durant was an even skinnier rookie and Russell Westbrook was a star point guard at UCLA, if the Sonics were returning.

In all likelihood, a professional hockey team in Seattle would be a slam dunk, no pun intended.  The Las Vegas Golden Knights rank sixteenth in the NHL in average attendance for the current season, and based on the preliminary numbers, a hockey franchise in Seattle would expectedly boast a significantly higher ranking.  One might point to the success of Seattle’s newest professional sports franchise, the Sounders.  In what is North America’s overall least popular professional sports league, the Sounders have remained the league’s most prevalent franchise, generating the most revenue each year since entering the league.  That should be a great indicator as to how well two teams in higher grossing leagues would fare in this city.  Especially one with a proven track record in this market like the Supersonics. 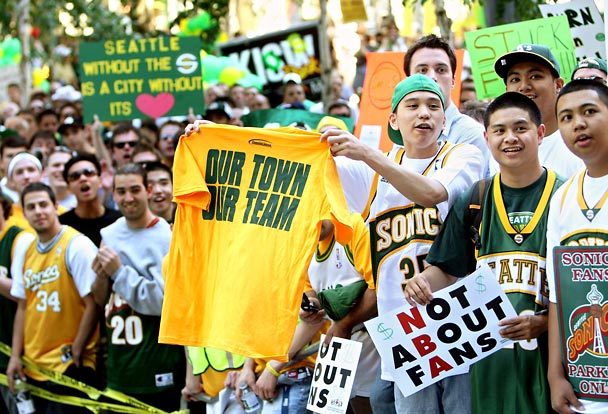 As the city continues to grow sports have become engrained in its roots as a vital part of our community.  Every fall hundreds of thousands of fans fill up CenturyLink Stadium as the notorious twelfth man strikes fear into opposing teams, causes countless false starts against opponents’ offensive lines, and have even been known to register on the Richter scale from time to time.  The Sounders continue to sell out every one of their home games, and even the Mariners are showing signs of promise with a new ownership group that appears to be committed to building a legitimate contender.  But winters in Seattle are wet, gray, and leave local sports fans feeling empty as we watch Russell Westbrook and Paul George making highlight real plays night after night for a team that should still be ours.

The Sonics were not just a team, they were a part of Seattle’s history.  The only professional franchise to win a major sports championship until the Seahawks won Super Bowl XLVIII.  We watched Hall of Famers such as Ray Allen, Gary Payton, and Lenny Wilkens. We witnessed the Reign Man dunk all over the NBA as him and Payton led us to a Finals matchup versus Jordan’s 72-win Chicago Bulls.  We even got a glimpse of what was to come in Kevin Durant’s rookie season as he averaged over 20 points a game and easily took home the Rookie of the Year award.  Basketball is more than just another sport here, it is a part of our culture, made evident by the number of collegiate and even professional players that have come out of the Seattle area in recent years.  But for the past ten winters, something has been missing here.  An NBA franchise that the city deserves, one that we have been without for ten years too long.  It is time to bring back history.  It is time to bring back the Sonics.