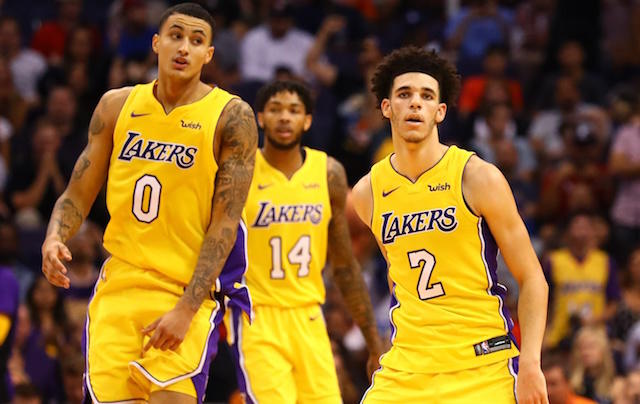 We are at the halfway point of the NBA season following All Star weekend, and the playoff picture is beginning to look clear now.  So  Simon Villanoz took a look at the four most promising teams. At the same time, it’s becoming clear which teams will not make the playoffs this year. On the bright side these 4 teams I’m about to talk about have the most promise, despite being in that group of teams seeing their playoff hopes disappear. I picked 2 teams from each conference that I believe will be a dangerous team someday, just not anytime this season. We will release in a 4 part series let’s start with…

I’m going to get the obvious teams out of the way before moving on to the two teams that I think can surprise the NBA someday. It’s hard not to imagine the Lakers bouncing back after this season. Whether they get the free agents they desire or not, I believe it will not affect how good the Lakers will be next season. Lonzo Ball will be the man everyone will hate in the NBA, because next year he will be a way more efficient offensive player after having a season under his belt. At the age of 20 everyone expects him to be a combination of Steph Curry and Russell Westbrook. So naturally people will be disappointed no matter what, because those are extremely high expectations. These are the same sort of expectations most people have had for LeBron. Anyways, Lonzo Ball will be one of the driving factors behind the Laker’s future success.

The other driving factors come in the form of Brandon Ingram, Kyle Kuzma, and Julius Randle. These three have and will pick up the slack for Lonzo when his offensive game just isn’t clicking. Ingram is leading the team with a solid 16.2 points in his second season, and expect him to continue to develop into an offensive juggernaut. Kuzma is right behind Ingram, averaging 15.7 points a game. Assuming this core group continues to take strides in the coming years, look for this core group of Lakers to challenge the Warriors in at least three years.

Of course, this wouldn’t be a piece on the Lakers without at least mentioning Lonzo’s younger siblings. Let’s say in a couple years the Lakers find them in a spot where the core of their team is carrying the team all the way into the playoffs. Except when this core comes off the floor, the bench struggles mightily. As discussed in one of my previous articles, I believe it would not hurt to bring in LaMelo and LiAngelo in on cheap contracts. LaVar would most likely not take no for an answer, and I guarantee when this time comes Los Angeles will be clamoring for the reunification of the Ball family. How stubborn would the Lakers have to be to at least not offer them a 10 day contract? Everyone wants to stop talking about the LiAngelo and LaMelo despite having very solid play against some of the best teams in Lithuania, but that doesn’t change the fact that they are playing well for their age. Either way in the near future the Lakers will be back on top once more.