Sunshine and rainbows won’t be in the forecast over New England this off-season. It’s no surprise, however, that the Patriots didn’t let the locker room and media distractions affect their gameplay.

This time around, there’s a lot more deflating going on than just a football. It’s an amazing accomplishment to win just one Super Bowl in the NFL, and even appearing in the Super Bowl is a great feat. Yet, Brady and Belichick along with the rest of the organization have made a habit out of it. Eight…. That’s the number of Super Bowls the Patriots have been in since 2002. Winning five out of seven of the Super Bowl, with the eighth right around the corner. 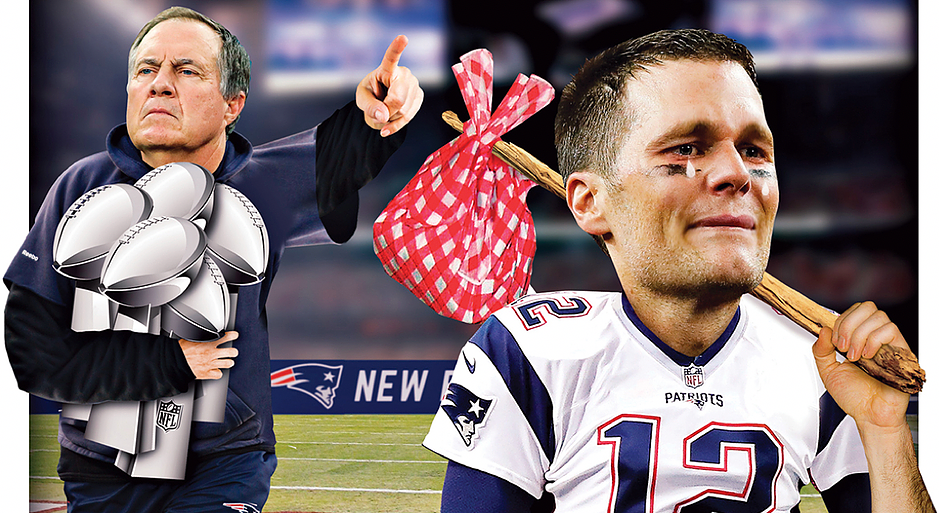 Tom Brady is the G.O.A.T. at the Quarterback position, along with Bill Belichick who’s the G.O.A.T. amongst head coaches. If you want to argue this then go ahead and sit in front of a wall and have at it. I’m no huge Patriots fan but give credit when credit is due.

For the first time under the Brady era, there has been a conflict amongst him and Belichick. With Kraft siding with America’s golden boy Tom Brady.

Jimmy Garoppolo was viewed as quite a pretty gem over these last few seasons by teams around the league. Sitting behind the best Quarterback the NFL has ever seen, just waiting for his turn to have a hand at the wheel.

However, like a lot of high school drama…. Insecurity took place.

Well, who in the world would have five Super Bowl rings and feel insecure? Yes, it’s the Prom King himself, Tom Brady.

Belichick has had his eyes on who he wants to dance with in the nearby future, and this person isn’t Tom Brady. Instead, it’s Jimmy Garoppolo. The carefully sculpted prodigy, that’s been learning from Tom Brady himself. Out with the old and in with the new is what Belichick has in his head.

Brady was intimidated by Jimmy Garoppolo, and some may find that silly. However, when taking a closer look, Brady has a right to be concerned.

Bill Belichick looks at the NFL for exactly what it is…. A business. To succeed in this business, you must win. Which includes preparing for the present as well as the future. Some of the trades made by Bill Belichick at first seem crazy but after a while, it all makes sense when you see him standing at the podium holding the Super Bowl trophy.

Father time is creeping up on Tom Brady, even though it may not seem like it now. Don’t forget though how all of a sudden Peyton Manning went from superstar to wash up has-been all within the matter of a season. This is exactly what Belichick is anticipating and was one of the reasons his asking price for Jimmy Garoppolo was so high at first.

He knew Garoppolo was going to be his future franchise Quarterback. There’s no time for a rebuilding season if Tom Brady leaves, and that is exactly why Belichick wanted to keep Garoppolo. So, he could continue the Patriots way.

Looking back to Belichick’s Cleveland days, he made it evident that he isn’t afraid to bench a fan favorite and star Quarterback. Bernie Kosar was the last good Quarterback the Browns have ever had and Bill Belichick had no problem moving on from him.

Brady was scared… So, he ran to Kraft and complained. The only way Brady could keep his position as a starter or a starter in New England at least, was if Garoppolo was gone. Kraft wouldn’t accept Belichick’s idea of moving on from Brady. Even though Belichick has had full control of letting players go when he pleases.

At the end of the day, something has to budge… Will the Kraft and Brady relationship rid their head coach? Ruining the future for another year or two of Tom Brady success. Belichick was looking towards the future. Keeping it strictly business.

Yet, that was too big of a pill to swallow for Kraft… He decided to stick with Brady.

Is this really worth losing a head coach who can coach more years then what Brady can play? You be the judge. At the end of the day, it’s the Patriots way.